Home » CRTN versus HARMONOISE and CNOSSOS

CRTN versus HARMONOISE and CNOSSOS 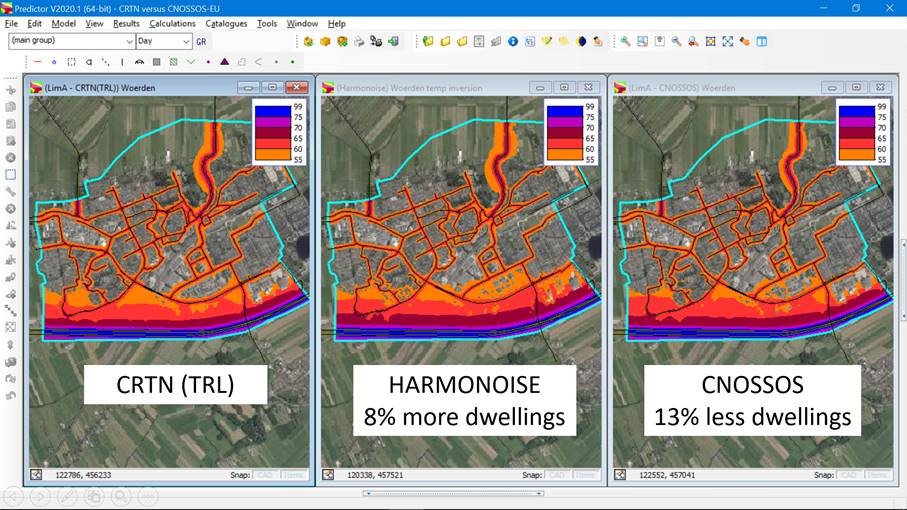 I attended the IOA workshop on THE FUTURE OF ROAD AND RAIL NOISE MODELLING IN THE UK. During this meeting the Harmonoise method was proposed as a possible method to look into. As we all know, the Harmonoise method was not appointed as the new European method because of the acoustical/political ‘battle’ between those who were in favor of the ISO 9613 method and those who were in favor of the more advanced Harmonoise method. We ended up in between with the NMPB-2008 method as the basis of the CNOSSOS method. Therefore, as a sequence on my previous post ‘CRTN versus CNOSSOS’, I did the same exercise with the Harmonoise method using the Predictor-LimA V2020 software. Comparing methods is always tricky. CRTN assumes an average downwind condition. The closest setting in Harmonoise is wind speed class W1 (0..1m/s) and stability class S5 (night, 0-4/8 cloud coverage ). However this simulates temperature inversion which leads to higher noise levels at larger distances when compared to an average downwind condition. Another setting that did not fit was the average ground factor outside the reflective road surfaces. In my previous comparison between CRTN and CNOSSOS I could use an average ground factor of 0.5 for both methods. However, in Harmonoise I had to choose between 0.7 (impedance class E Compacted field and gravel) and 0.3 (impedance class F – Compacted dense ground). I decided to choose 0.7. The outcome of this indicative test for the Woerden model is that Harmonoise calculates higher and CNOSSOS calculates lower noise levels than CRTN, leading to respectively 8% more and 13% less dwellings exposed to noise levels higher than 55 dB(A).